Canon 70D is one of the most popular cameras despite being old. The main reason for its popularity is its budget-friendliness and durable nature.

There are a lot of microphones available for the canon 70D. These microphones differ from each other in quality as well as budget. Most people get overwhelmed while choosing a good microphone. This article is written so that we can help you choose the best microphone for your camera.

This blog post will explore some of the top options and help guide you in making an informed decision about which mic suits your needs best. So I’ll not bore you much, here are our top picks for this post in the table below. We’ll review each of these microphones with all the features and specs.

Today cameras are widely being used to make video content for social media i.e, Youtube, Facebook, etc. Vlogging and live streaming are two of the most popular genres on Youtube and Facebook. For the retention of the audience, audio is as important for these kinds of videos.

Noise reduction or sound insulation is one quality that is important and plays a significant role in making audio better in any genre.

We must be sure why we need a microphone to choose a good microphone. Sometimes the best microphone for others is not the best choice for you. Let’s dive deeper into the above-mentioned microphones:

It’s a small, highly portable microphone that can easily be installed on your canon 70D. Its design is beautiful and elegant.

Rode VideoMicro uses a cardoid polor pattern. The cardioid pattern ignores the audio coming from the side and allows audio that comes from the face of the mic.

Rode VideoMicro also gives a pop filter along with the microphone. The cardioid polar pattern and pop filter allow this microphone to record your voice cleanly in a bustling and noisy environment.

You don’t need to carry around the charger for this microphone because it doesn’t have a battery. It works on the camera’s power. This leads to the popularity of this microphone.

This microphone has a shoe mount which allows it to mount on a camera or other equipment i.e. tripods. It has a 3.5mm jack on both ends.

Rode VideoMicro is the best microphone for vloggers. It’s portable, small, and captures less noise than most microphones. Also, there is no need to carry extra batteries. 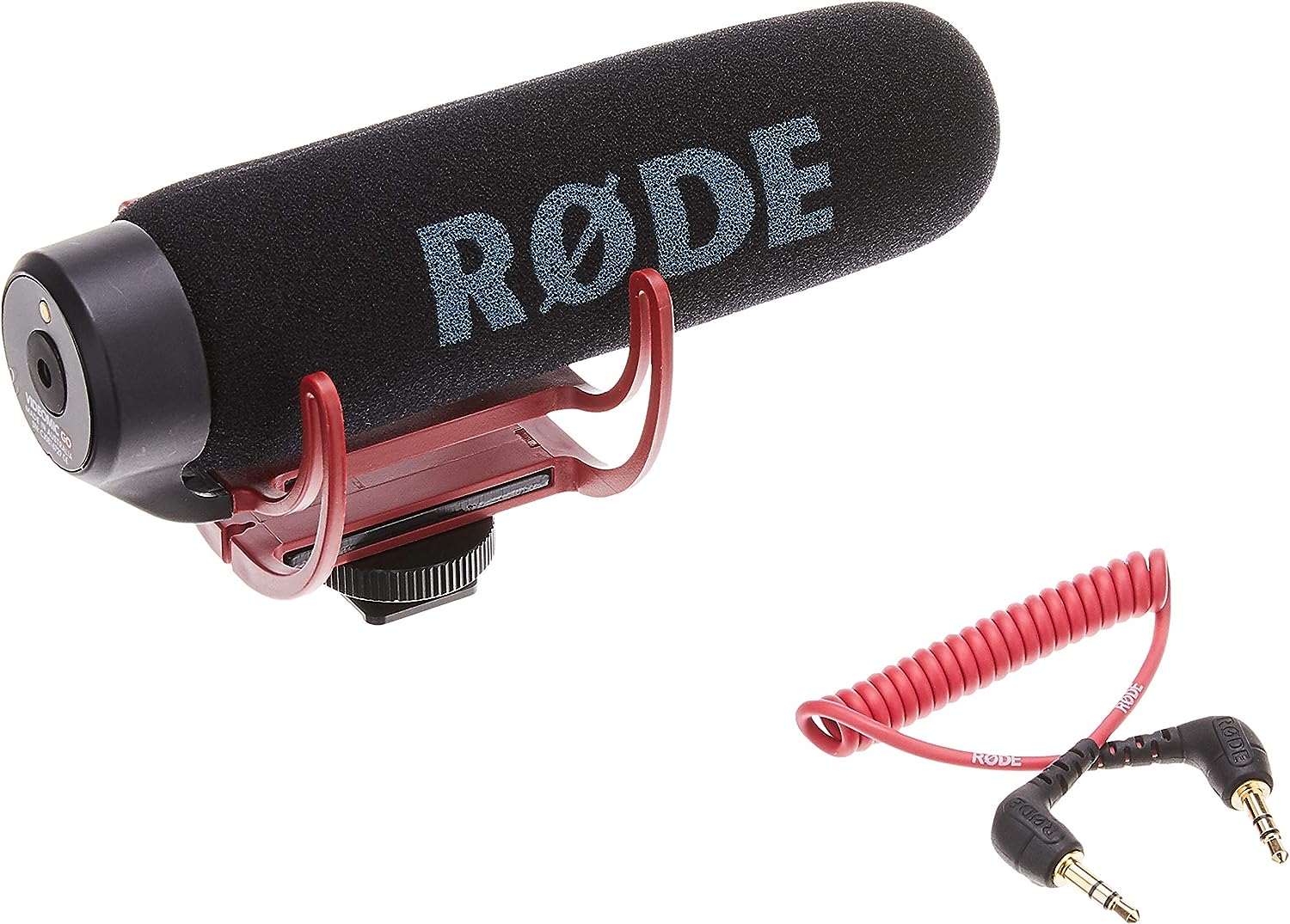 Rode VideoMic Go is basically a longer and more reliable relative of its counterpart, Rode Videomic.

Rode VideoMic Go is a lightweight microphone that is longer than Rode video micro. But size doesn’t matter because it has better quality than Rode VideoMicro.

This microphone is best while recording from a short distance. It’s the down point of generally all shotgun mics. But for aspiring vloggers and YouTubers, it will cause no issues.

Rode VideoMic Go is a shotgun microphone as well. Shotgun microphones are good for public or open environments where a lot of things are happening in the background because they contain a carotid pattern that doesn’t allow sound from directions other than the front. The good thing about it is that it comes with a windshield and built-in pop filters, which adds more to noise reduction quality.

Rode VideoMic Go contains a shock mount. This shock mount absorbs extra noise created when moving the camera hurriedly. The controls on this microphone are fairly simple, which is a plus point for beginners.

Rode VideoMic Go is also an in-line microphone like Rode VideoMicro, which means no battery.

Boya BY-M1 is the only lavalier and wired microphone on our list. This makes it perfectly suitable for jobs that require distance recordings like Interviews, presentations, and recording in closed or private spaces.

Boya BY-M1 is not very suitable for public spaces because it is an omnidirectional condenser microphone and records all the sounds around the microphone as well; it can allow unwanted sounds such as noise.

Boya By-M1 cable can be annoying when using it to record video in public. This is the main reason why vloggers don’t like using it.

One of the reasons this microphone is so popular is that it has an enormous battery time of 700 hours, and the battery is also not a big one but a small LR-44!

This microphone is cheaper, so the build is not as sturdy as Rode VideoMirco and Rode VideoMic, but it is better than most microphones at this price range. It has a plastic body so there is a need to be a bit careful. It also comes with a windshield which is a plus point.

This microphone records sound all around the microphone, which will record details in the environment better than other microphones.

This microphone may be cheap, but its audio quality is too good for this price. It has a flat frequency response which gives us natural-sounding audio.

Furthermore, It has a cable with a length of  6 meters, which can be annoying in public spaces with a lot of activities. So this microphone is unsuitable for vlogging or anyone who likes to record it up close. If you need a microphone for close recording, then it is better to choose a shotgun microphone.

Because it’s a budget-friendly lavalier microphone, so it comes with a plastic body, but don’t worry it’s a nice sturdy plastic and windscreen for noise reduction. It works with an LR-44 small battery, but it gives you 700 hours of battery life which is amazing.

It has an inline capsule that contains a smartphone-to-camera switch that you can use accordingly. BY-M1 comes with an omnidirectional polar pattern with a flat frequency response of 65Hz – 18kHz and an output impedance of 1000 ohms or less.

It wanted to address both categories. That’s why I included this microphone in our list because if you’re recording away from your camera, this mic is the best option.

But if you wanna pick up a mic for a vlog and you travel a lot, then this microphone can be annoying. And you should go for a portable shotgun mic. 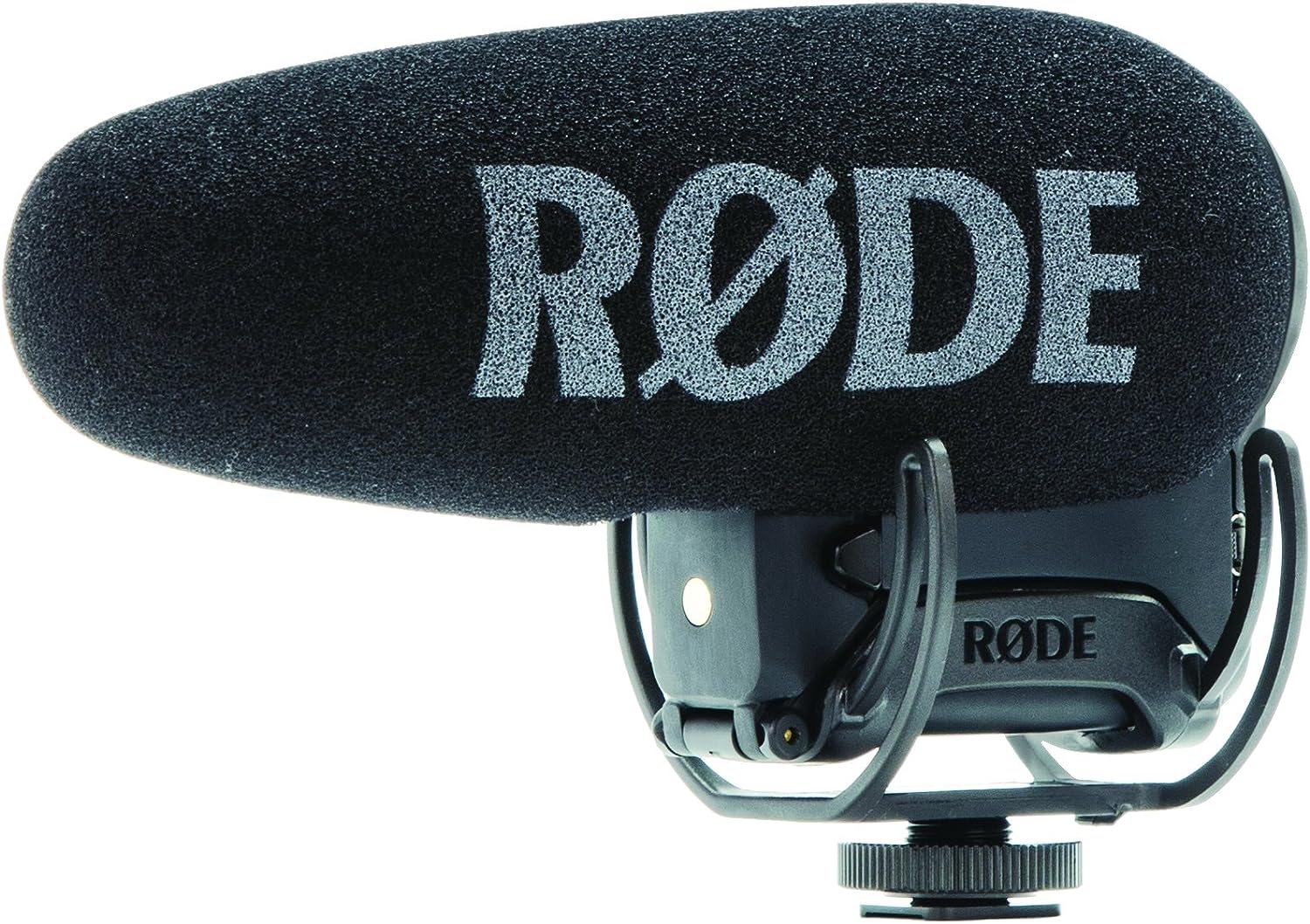 As it is an upgraded version, its price is also expensive. This makes this microphone not so friendly for the person who is just in for habit or just starting out their career. But this is one of the best for the person who wants to improve or upgrade the quality of the audio.

Rode Video micro pro+ is also a shotgun microphone. It can be used on camcorders, mirrorless cameras, and your favorite DSLR Canon 70D.

This microphone is on the bigger side. But the quality is the best-sounding microphone on our list.

This microphone is also a shotgun with a carotid pattern which negates the sound around it. It also comes with a built-in Pop filter. This makes it good for noisy environments. Windshield further enhances its noise reduction property.

Unlike other shotgun microphones in this list, this microphone comes with a powerful battery with a good 100 hours of battery timing. It also has a smart switch on and off feature, which will help you save your battery further.

Rode VideoMicro pro+ also comes with a dispatchable cable that can be removed at will. It has decent digital controls.

The audio quality of this microphone is too good. It covers the total range of human hearing which is 20Hz to 20kHz.It makes this microphone better for filming and videography.

This microphone is lightweight despite being bigger. This makes Rode VideoMicro Pro+ easier to carry.

The Above mentioned microphones are all good for Canon 70D. But they have their strong point as well as weak points.

The main question you have to ask yourself is, “why do I need the microphone, and for what purpose will I use it?”. Are you tight on budget, or do you need your audio to improve? Whether you need it to record at a close or long distance.

The microphone for long-range recording will be Boya BY-M1. It is the best you can get on a low budget and has decent sound quality.

For close distance, the best-sounding microphone will be Rode VideoMicro Pro+, but it is expensive. It can be good for people with suitable incomes who want to boost content quality.

If you’re tight on budget and need a good close-distance microphone, Rode VideoMicro and Rode VideoMic Go will be best.

This is an Ultimate option for Sony A6400, if you’re looking for a professional and great sounding microphone for on camera recording. It sounds good, It comes with a shock mount and a pop shield for noise rejection. + Very simple to use, plug and play.

Every microphone has its pros and cons. It is not about the money; it’s about how you need your microphone to perform in various situations. Sometimes a cheaper microphone can get the job done better than the most expensive microphone.

Which type of microphone is best for Canon 70D?

It depends on your purpose. For which purpose you wanna get a microphone. If you want for normal vlogging and youtube videos, you can go for a shotgun microphone. But if you’re gonna record from a distance you can go with a wireless or long wired mic.

Does Canon 70D have a built-in microphone?

Can I mount Rode Microphones on Canon 70D?

Yes, Canon’s cameras come with a steel microphone place, where you can attach your Rode Microphone.